Powered by
Undiscovered Places of Svaneti. Affordable Hikes and Climbs.

Thinking about   attractive places to visit after our mountain trip?
Or just learn something new about  the country?
Scroll down for some of my favorites. 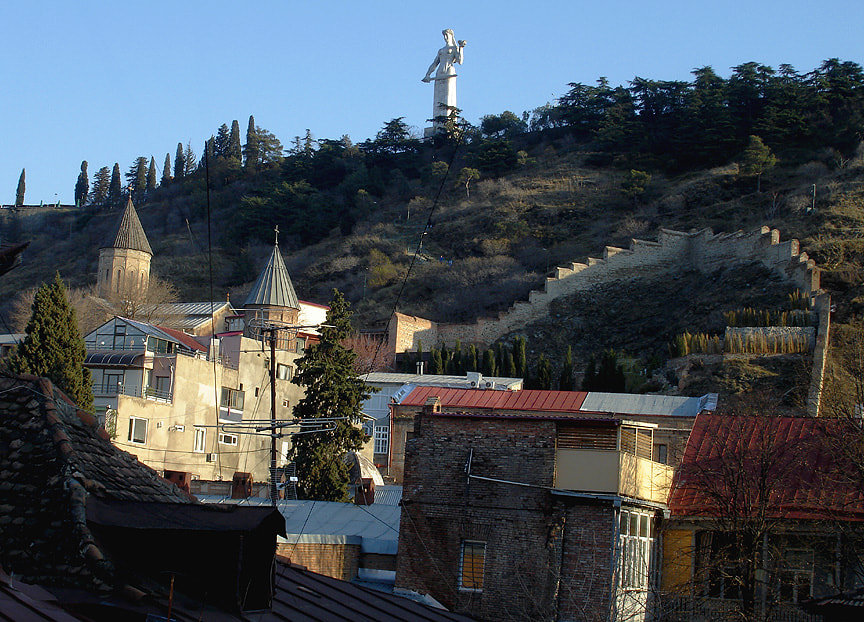 The profusion of gigantic  statues in the former USSR doesn't of course mean that it was purely a soviet  trend.    True,  there they were popular like nowhere else.  However Statue of Liberty  and Rio's Christ the Redeemer  were  built earlier and  similar colossus   are   erected even these days (Statue of Unity).
Tbilisi (once the capital of Georgian Soviet  Socialist Republic  ) has it's own  20 meters  high guardian dressed in concrete and standing on the crest of  Sololaki Range overlooking the city.
Mother Kartli (designed by Elguja Amashukeli) is   known to every  visitor but very few know its interesting history.

1958
Tbilisi celebrates  its 1500th  anniversary and the wooden lady with sword and chalice   commemorates this event.
But why  is it made of wood?  Because   it won't be there permanently.  Or maybe it is? 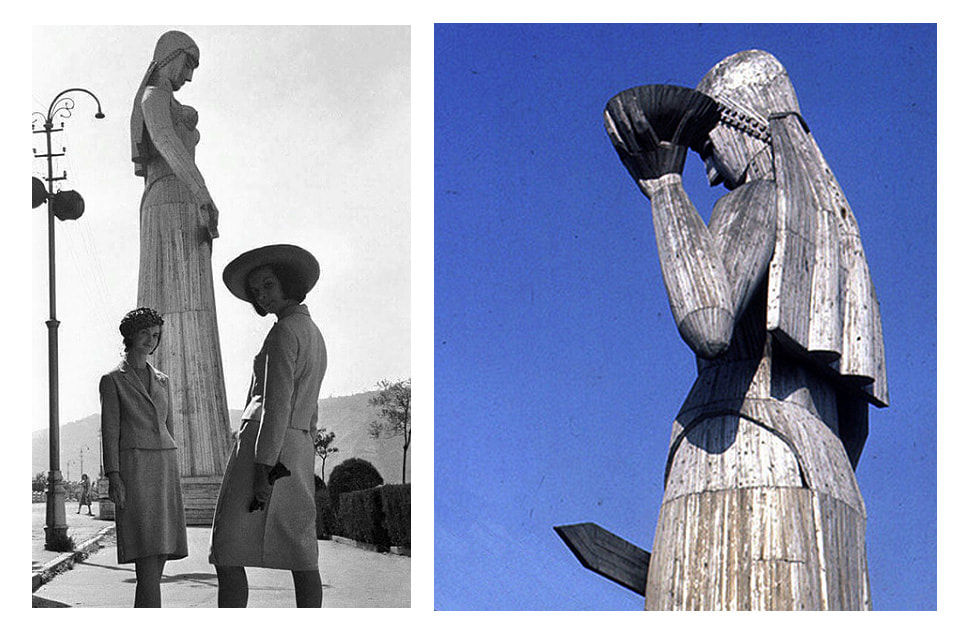 ​1963
Citizens of Tbilisi like the statue and  want  to have it  for years to come.
​The decision it to cover it with aluminium to prevent  rot.  Done! 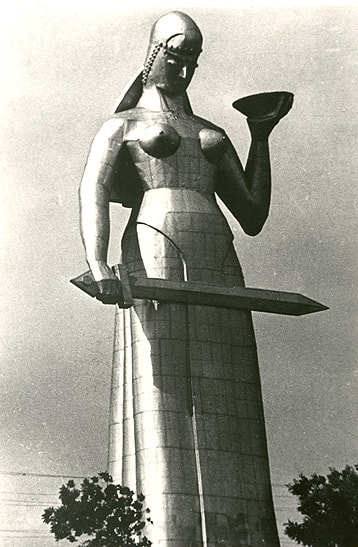 ​1990th
Georgia is already independent  but its   economy  have seen better days.
The statue  must to be replaced because it  starts to fall apart...
Despite city's limited budget    Mother Kartli  2 is designed  and built  using concrete panels.
For two days they even stand together!

​Today
Mother Kartli 2 is still there!
If you ask me what I think about it  ... The first  one was  more feminine   and at the same time more abstract.  Also the downcast gaze was more traditional just as her head cover.    Still,  I wish the wood-made Mother was there.  ..
In general I am not a big fan of   this rather tasteless  giant statue  but as a focal point it  works rather well. 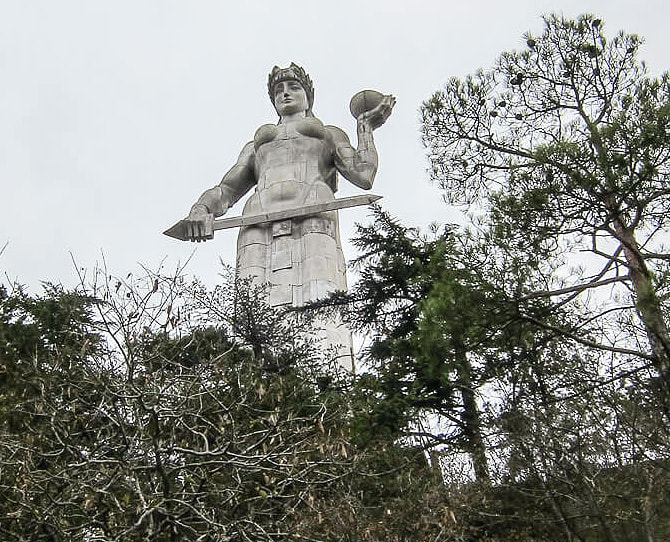 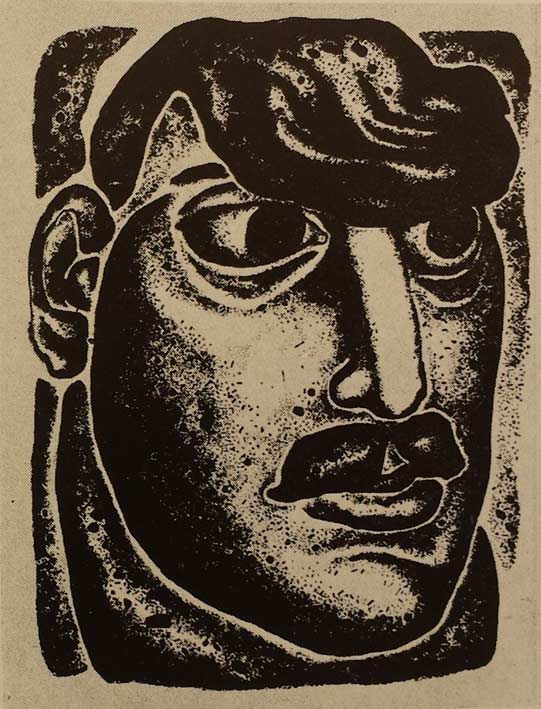 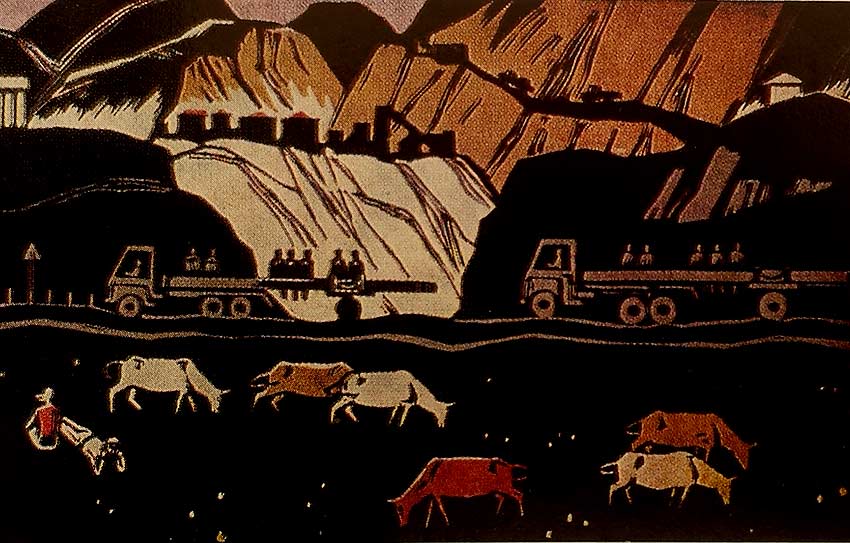 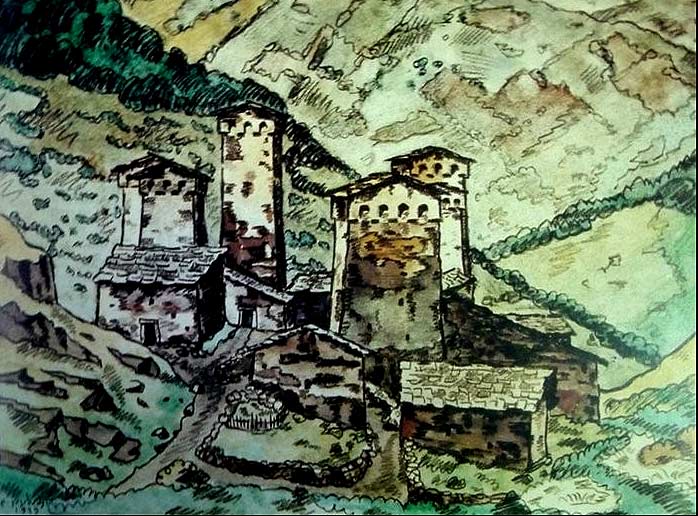 1.  A. Bandzeladze, Portarait of Arsen,  1964    Arsen  Odzelashvili (1797— 1842) was a Georgian outlaw   said to have robbed the rich to help the poor.  Here is his portrait from the beautifully designed book "Song of Arsen".
​2.  D. Nodia, Roads of Inguri, 1968      Color woodcut  is among the most complex  techniques of printmaking. Here the modern world of machinery  and human will is  juxtaposed with traditional ways.
3. D.Kakabadze, Svaneti, 1929    One of the prominent Georgian artists of 20th century he  made number of watercolor drawings  which documented  Svaneti  just  before the road from Zugdidi was constructed. 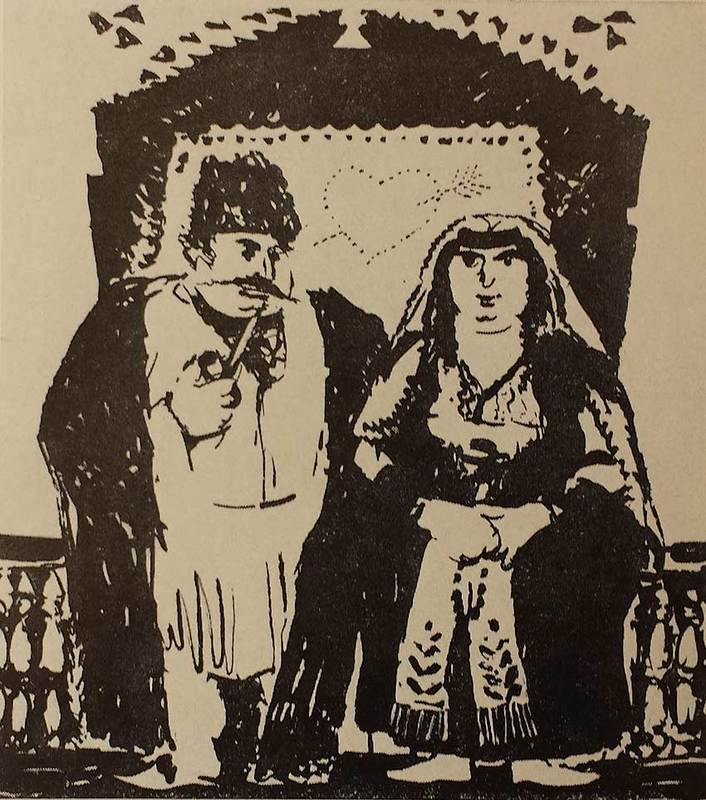 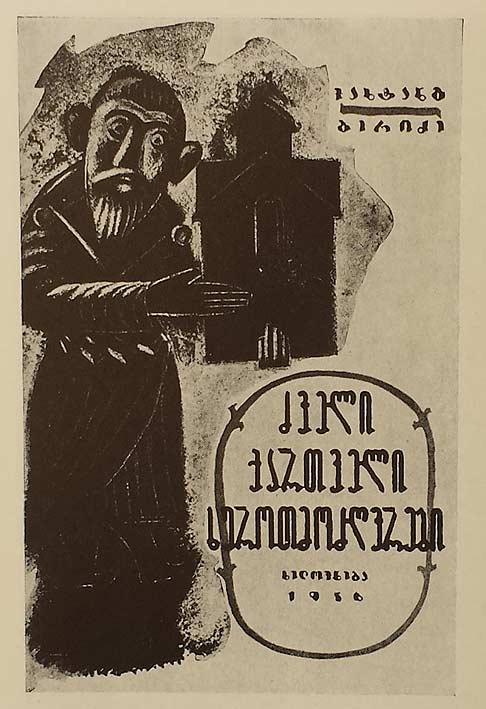 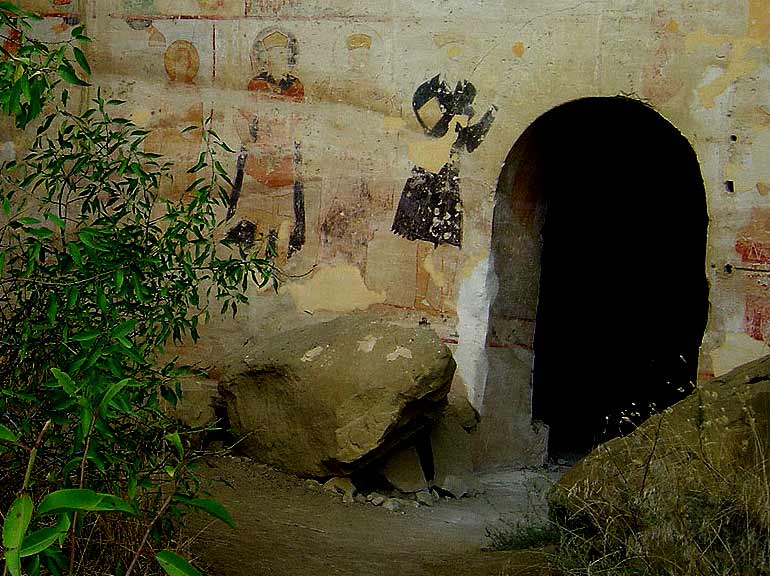 Very close to Tbilisi and to my mind in many ways is superior to Vardzia. Some people will be offended to hear this because of Vardzia's almost iconic status.  But the place though it's value and beauty is unquestionable became  so popular that the whole experience is already tarnished by crowds and noise.
To avoid explanation boards, hand railings and slightly artificial atmosphere you might consider visiting Davit Gareja.
​Every step there will bring a sense of discovery.
Nothing in Davit Gareja is polished  so nature  and art  are linked here in  harmony (photo above). True, most of the frescoes (IX-XVII centuries) are poorly preserved  but  this  doesn't  damage the powerful impression  they leave. On the contrary.
Old paints dried and disappeared  baring  initial drawing  with lines of rare beauty (image below). 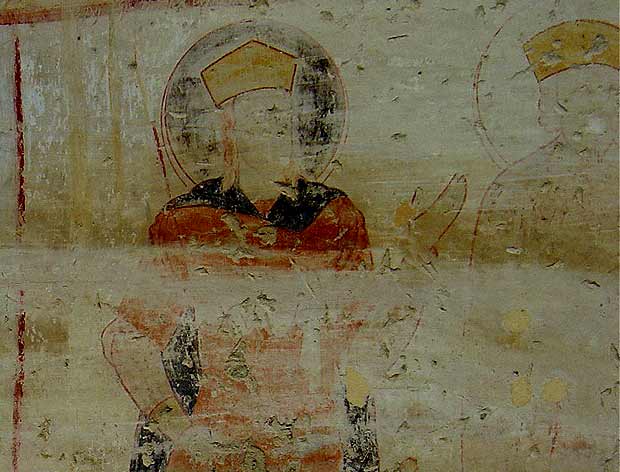 In Soviet time there was a practice to make  an exact copies of frescoes from around Georgia so to preserve them for the future.  Some of the best artists were employed for this task and it might be a better solution than to make a merciless  restoration.  ​
photo below: "The  Last Supper" from Davit Gareja, copy by Ketevan Magalashvili,  National Museum of Georgia 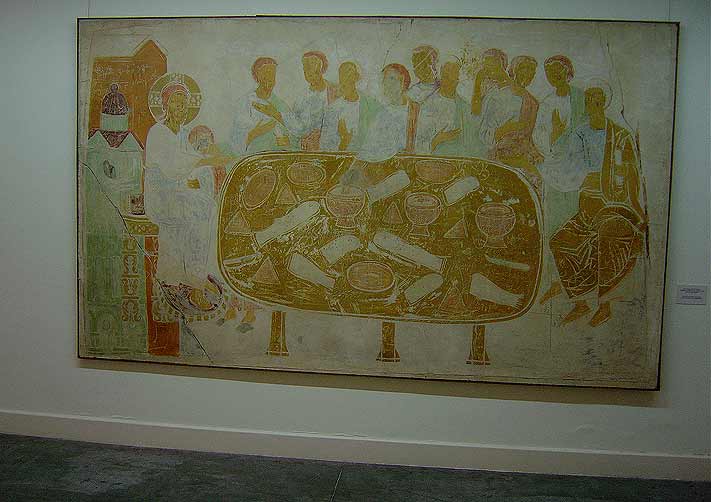 Moving between the caves you may notice the wide range of styles. Some are reminiscent of  Cappadocian  painting, others  bring to mind even the French Romanesque  frescoes.
Suddenly on the bare ceiling you notice a subtle image of apostle  that miraculously survived all those centuries (image below). 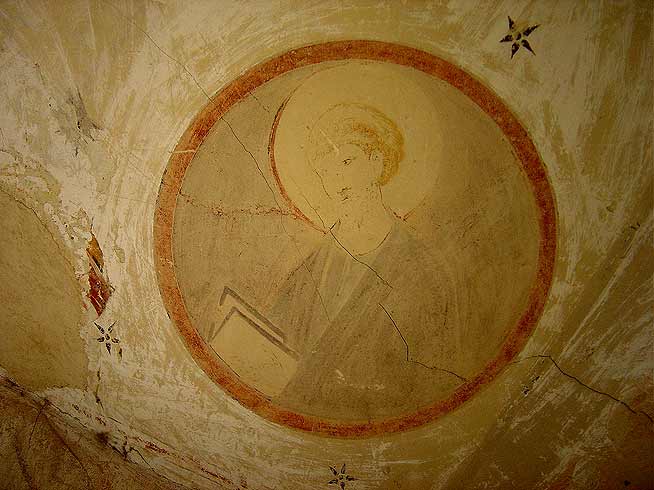 Semi-desert environment of the caves is green  in the spring but gets  brown and ochre  in summer heat.  Coming to Udabno after  subtropical Batumi and high places of the Caucasus you start to realize how much variety this small country has. 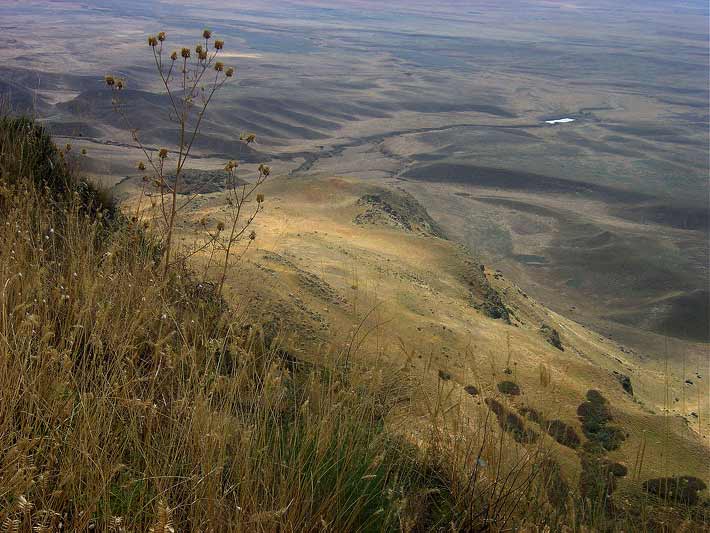 The easiest way to visit  Davit Gareja is  taking a day tour using Gareji Line (visit their fb page for details). After arrival head  for the caves and don't waste time at newer Lavra.  They are on the other side of the range and it takes 20 minutes to reach them.
Enjoy!
:: Short swim in the Black Sea :: 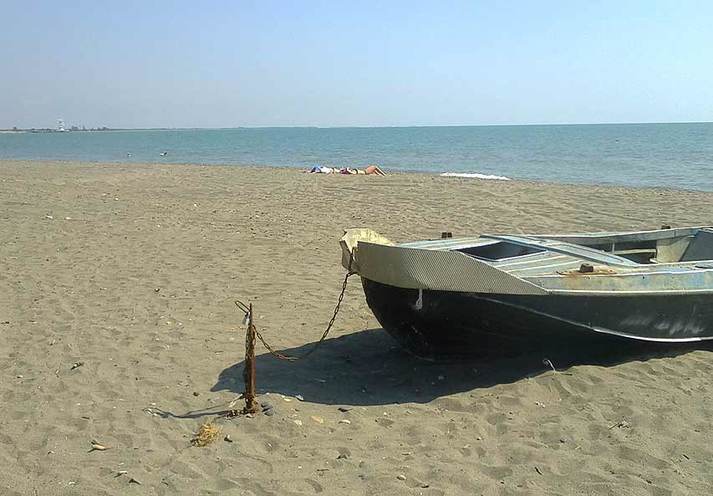 photo:  this beach  is  15 min walk from the civilized part of Anaklia resort.  It has few people but shade is scarce.
Anaklia was initially planned to become another Batumi. However it didn't happen. It's position away from the Turkish border is one  reason, others are numerous and not to be discussed here.
While Anaklia is left behind Batumi it still has some decent infrastructure. You can wash yourself after swim, seat at the seaside cafe and enjoy sandy beaches that are quite clean.
After travels in Svaneti this is the best place to soak your weary limbs in salty water.
Don't expect too much from this resort and you won't be disappointed *

If you travel from Mestia to Tbilisi by train you will have to take "marshrutka" (shared taxi) to Zugdidi (ask driver to drop you near the train station). If you leave Mestia early (8-9 o'clock in the morning) you will arrive to Zugdidi by noon and will have another 10 hours to wait for the night train (the night train will bring you to Tbilisi at 6AM which is preferred choice for some people).

*  On sunny days only, rainy weather on the Black Sea is miserable

Suggested plan  is as such:
1. At the train station buy ticket to Tbilisi (if you didn't buy it in advance)
2. Leave your belonging at left-luggage (train station)
3. Visit Zugdidi market to buy fruits, bread, cheese.
4. Take "marshrutka" ( 1,5 lari) or private taxi (20 lari) to Anaklia
5. Swim, sun-bath and sip beer at promenade
6. Return to Zugdidi and catch a night train (around 10PM)

To find marshrutka to Anaklia you have to walk 10 minutes along  Rustaveli street (turn left after leaving train station) then turn left again before the bridge (market is after the bridge on your right). You will see many shops on both sides of the wide commercial street. Marshrutka to Anaklia  is behind (ask if in doubt) shops on the right. Private taxi is much a better option than crowded marshrutka. 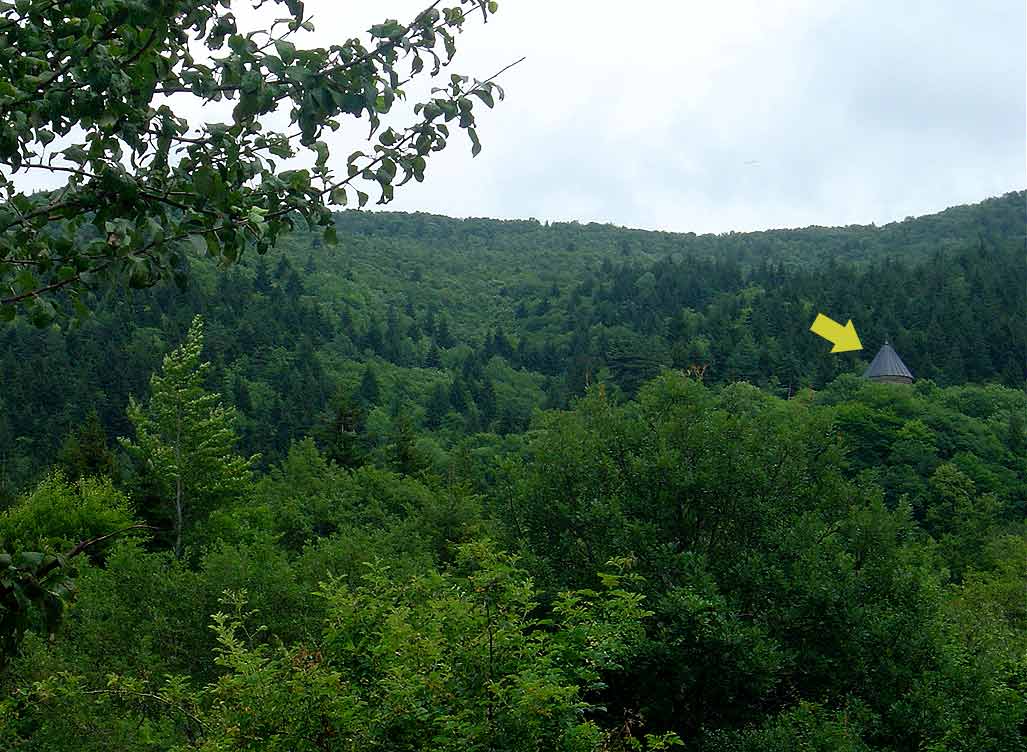 Because of it's proximity to Tbilisi,  Mtskheta is the most popular destination.  No doubt, both Svetitskhoveli  Cathedral and  ancient Dzhvari (on the hill)  deserve this attention.
However, the  greatest masterpiece of Georgian  monumental painting is not there...
To see it you have to get off near the  small town of Kareli (on the Tbilisi  - Batumi highway)  and take either taxi or local transport that will bring you to  the village named Vedreba . From there you will walk 30 minutes uphill  till you reach the St.Nicolas Cathedral of Kintsvisi.
It's  frescoes*  belong to  epoch when Georgian Art reached it's most sublime.
They were created between 1207 and 1213 during the reign of Queen Tamar (Tamar Mepe) who's portrait was painted here together with her son Giorgi Lasha and King Giorgi III (already dead at that time).
"Kintsvisi Angel"   (featured in most books on  Medieval Georgian Art) is seen above them. Note also how beautiful is the blue background of these frescoes  making the interior even more spacious and bright.
On the hot day descend to the  wooded and cool Kintsvirula valley behind the church.  Here you will experience something that well known destinations lack - peace and connection to this ancient land.
​*To be precise these are secco - painted on dry plaster, not on wet surface as in fresco technique and hence it's poor state of  preservation.